It was during the start of the COVID-19 pandemic when everybody needed a little more extra comfort because of how scary and silent the world was at that time. So when a man named Dutch Richard heard that there were puppies who were in need of a home, he quickly went to check them out.

Dutch’s good friend messaged him one morning that there was a house that had a sign about puppies for adoption. All the tiny doggos were all crammed up in one crate. One pooch immediately caught his attention so he adopted her and named her Lola. 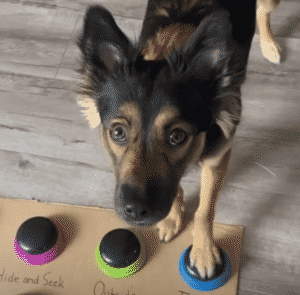 The adorable pup made Dutch fall in love with her in an instant. She was a really sweet and friendly doggo and looked like she was just so happy that she has found her forever home. All her puppy siblings also got adopted by other kind hoomans.

As Lola started her new life in her new home, she spent each passing day in quarantine just being with her hooman dad all day long. They got to bond a lot and she eventually learned all the basic commands and tricks that dogs usually do. But seeing how smart this doggo is, Dutch had another idea.

He kept seeing videos about dogs learning how to talk to their hoomans using buttons that would produce specific words. So Dutch ordered their very own set of buttons and Lola got hold of it after some training. She now knows words like play, hide and seek, outside, water, and her least favorite, bath. 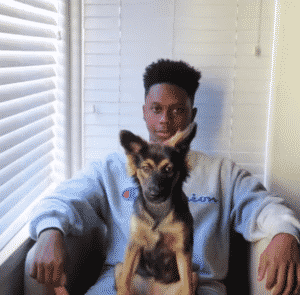 Dutch kept adding more buttons as Lola started mastering more words as time went by. But among all of those, the Treat button is her favorite thing. Lola has proven to her hooman that she is really a one-of-a-kind doggo.

Ever since adopting Lola, Dutch is so happy that he made the right choice to bring this pup home. Going through quarantine wasn’t easy but Lola never made his hooman feel that he was alone. Even though the world was on hold, Lola made each day so much brighter and happier for Dutch.

Thea and Eric, a couple from the Philippines, have so …

View Story Aggressive Chihuahua Gets Adopted By Foster Father And …